skip to main | skip to sidebar

RANDOM THOUGHTS ABOUT LIFE AND TRAINING OF A SENIOR RKC

It has been a crazy month. Started with RKC Ireland. 10 days in Ireland with the love of my life, Oh yeah I had to teach at the RKC too. Laura and I had a great time trekking all over the beautiful landscape. Not to mention that we all got the royal treatment from our Irish brothers and sister D, Paul and of course Carmel
It's amazing how people can feel like family from the first day you meet them.

After we got back to CA Laura and I had 20ish days before a wedding. In that time I think I saw Laura for a total of about 24hrs in those 20ish days leading up to our wedding. She was on a roll and busting out orders and plans like it was her job! The result was the most special day of my almost 40 years of life. I still can't believe that I'm this lucky. I can not wait to see what unfolds for us, it's going to be an unreal adventure.

That's a quick update of life in my world. I am amazed everyday by those around me AKA the Sacks family. Thank you all for helping me be a better me.
Posted by Doug Nepodal Sr. RKC at 2:11 PM No comments:

Off we go again

It's that time again. Laura and I have been lucky enough to be picked to teach at the first ever RKC Ireland. What a honor! I'll post all about it when we return.

This does mean that there will be NO classes in Ventura the week of OCT 3rd. Classes will resume on Oct 11th. Enjoy the week off!
Posted by Doug Nepodal Sr. RKC at 8:37 PM No comments:

I'm reminded daily of how great life can be. A smile from Laura, a motorcycle ride through the mountains. Both of which must be the reason I walk the earth because I can't imagine something that would make me happier.

I teach kettlebells for a living. Really? I've traveled to places, made friends and experienced things I wouldn't have without kettlebells. Wow, a hunk of iron that looks like a cannonball that you JUST swing and pick up and put back down. I often tell people that the RKC will change your life if you let it. I remind myself how much it has done for me. Just a piece of iron, not really but a daily reminder of how well off I am.
Posted by Doug Nepodal Sr. RKC at 11:32 AM No comments:

I had the pleasure of teaching at the most recent RKC II in Saint Paul, MN. It was hot damp and just as tough as it should have been.

Team Kilt, killed it as always. What a great group! My goal at RKCs is to build a team that supports each other for the whole weekend. I got lucky because they were cheering for there teammates right out of the box Friday morning and it built from there. This then made the rest of the weekend much smoother. If a team member was attempting a PR in the press or testing technique they had the whole group for support. It was a pleasure to have all of you. THANK YOU for a great weekend!
Posted by Doug Nepodal Sr. RKC at 6:26 AM No comments:

It has been over a year since I last posted anything on my blog. I guess it's time for an update.

Here is the short and sweet of it.

Tons of travel for RKC and HKC stuff. Several new projects and clients that have changed the way I view some aspects of training. All for the good! There are clients climbing mountains, throwing spears, flying stunt planes and jumping motorcycles above the world like they are walking to the corner store. I have been very fortunate to build new friendships and keep old ones.

I was reminded today by a good friend of mine just how lucky I am! He of course didn't know that's what he was doing. But somebody stopping by just to poke a head into class means more than people know. Thanks Jeff.

The other huge thing that has happened is that Laura Sacks agreed to become my wife. I could ask for nothing more. So this November we'll be getting married in Carpinteria CA with 160 of our closest friends. Life is grand and I try to remember that everyday. 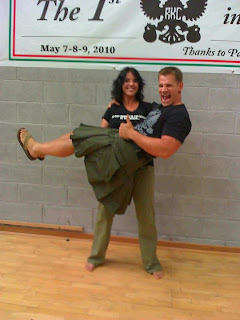 The last 12 days have been a whirlwind of hours, travel, sweat, fun and kettlebells. Starting on

May 4th Laura and I flew to Venice Italy for the first ever RKC Italia! What an amazing experience. We knew it was gong to be a passionate group but they were above and beyond what we had imagined. There was no such thing as a group dinner on just one night. No everybody ate together all 3 nights. We were treated like kings and queens at a local restaurant were for 20 euros we ate until we wanted to stop! It was unreal. The whole time getting looks from the rest to people trying to eat. Just imagine 40 people that think the trashing of a RKC weekend is a good time. Now make them Italians, then turn the volume up and you might begin to get the idea. True to RKC form we have made life long friends. It felt like home.

Laura and I are already talking about our next trip. We were able to spend a couple of days on both sides of the cert in Venice. What a surreal place. It wasn't nearly long enough though but it sure got the wheels spinning.

After Venice was the long flight home. Which thanks to Iceland and the volcano left an hour late and took 2 1/2 hours longer than normal. It's always bad to land an hour after your connecting flight has left!! Luckily we were rescheduled on a flight 4 hours after our original. This had us walking in our front door some 28 hours after we took off.

3 days after getting back from Italy I was scheduled to teach a big HKC in La Jolla with Franz, Yoana, and Keats Snideman. I have to say I was really worried about recovering from jet lag in time to give it my best. It took about ten minutes to get in the groove and then it was off the the races! When under stress your body reverts to training:) We had a great group of candidates and a tremendous group of instructors. The weather was perfect the kettlebells were flying and we all had a great time.

After the HKC we had a group dinner where I piled in a ton of food then we hit the road for the 31/2 hour trip home. Hit the 11:00pm traffic in LA that added a hour to the trip and we walked in the house at 1 am this morning. Slept for 9 hours and I'm feeling pretty damn good. I'm going to jump on the motorcycle and take a spin and kick back for the rest of the day. 3 weeks until HKC Seattle.

I have to give special thanks to Laura Sacks RKC, for being a great instructor, supporter and secretary. I love you!
Posted by Doug Nepodal Sr. RKC at 11:32 AM 1 comment:

One week left in the first cycle.

Laura and I finished the last workout of week 3 yesterday. It was simple and tough. Week start week four tomorrow before we get our new 4 weeks from Geoff. Can't wait!
Posted by Doug Nepodal Sr. RKC at 1:11 PM 1 comment:

WOW this is going to be tough. Geoff's program is really tough but it is getting the desired results. Just started week 3 and it took a big effort to push through to the end of the workout. I of course did with Laura swinging and suffering along side of me. I can only imagine what the next 13 weeks will have in store.

I know for a fact that this is a program that I will be using for my clients and recommending for others.
Posted by Doug Nepodal Sr. RKC at 2:20 PM No comments:

The title sums up what's been going on in my life lately. I have been teaching HKCs going to RKC to hang with my friends and test driving Geoff's new workouts. The first two things are going great the last thing SUCKS!!!!!

The reason it sucks is because its a fat burning program. Geoff is an evil man and I will be posting regularly whining about how much I don't like him. Not really but his new program is killer.

Also check out my website for our new shirts. Pavel has one and is really digging it!
Posted by Doug Nepodal Sr. RKC at 9:44 AM No comments:

Laura and I are starting Sr. RKC Geoff Neupert's Fat loss program. He asked if we would take it for a test drive so of course I said yes. It is going to be brutal. I will keep all informed as we go through the process.
Posted by Doug Nepodal Sr. RKC at 9:21 AM 1 comment: 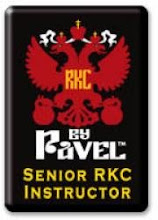 People Checking Me Out